The pieces that follow form a selection of my work on the theme of conflict. This topic was instigated by the then forthcoming anniversary of the death of my grandmother’s brother at the Second Battle of Ypres, 1915. I wanted to produce something as a memorial for him and this became my first stitched piece to tackle death as a subject, Requiem: les Fleurs du Mal.

After this, I began to think about how the tragedy of war has continued on in various parts of the globe and I made my collaged piece, Continuum. I now focus on my experiences of the Troubles in Northern Ireland in my part-time PhD in Fine Art at Aberystwyth University in which I explore how the process of stitch can express both humanity’s compassion and mankind’s inhumanity towards others through the prism of the symbiotic relationship between stitch, sound and word.

My grandmother’s brother, Thomas Alexander Keith, or Tommy as he was known, had emigrated to Canada with his older brother, William, shortly before the outbreak of the First World War. Both brothers volunteered to fight with the Canadian Expeditionary Force in 1914; William survived the war but Tommy was killed during a gas attack in the Second Battle of Ypres, 1915. The model for the figure in the image is my son, Ed, who thankfully does not have to go to war as he would have done were this one hundred years ago.

The First World War did not become, as so many had hoped, the ‘war to end all wars’ but the tragedy of all those who lost their lives then, military and civilian, from many nationalities, now stand as symbols for all those who have died and continue to die in mankind’s constant warring against one another.

Her Pillow, the Earth

This piece references not just my experiences of the Troubles in Northern Ireland but also the plight of children caught up in the recent violence in Syria and in Aleppo particularly. Children fleeing the war become refugees and sleep on the ground in tents; others are tragically killed and the ground becomes their resting place.

This piece was exhibited in ‘War-Torn Children’, an exhibition under the aegis of Conflict Textiles a collection begun by curator Roberta Bacic supported by Ulster University. Another of my conflict works Continuum has also been exhibited with this group, with information about this work and the exhibition on the same website and in my Thread of the Spirit blog.

The image pictured here is based on an incidence of violence in Belfast during the Troubles in the 1970s. It visualises my memories of how people would disappear into smoke when a bomb exploded and only afterwards would you find out if they were alive or dead.

The following is a link to my reading of my poem also titled  After.

Before I started making artwork based on my experiences of conflict and in light of the continuing situations of armed violence in countries across the globe, I had written poetry about the Troubles and the following poem Lagan 1995 is one of the first. This appeared in an anthology of women’s poetry called Her Mind’s Eye published by Pyramid Press. The poem speaks about Belfast and for those unfamiliar with the city, the Lagan is the river that runs through it to the lough.

Red river, blood river, flotsam of the
dead river, creep around ships in harbour,
pull yourself to the mother sea, water
salt-bright as tears. Pax vobiscum in the
silver chalice; is this really the end to
fear? Spewed over hate-erupted fires,
a new bridge is slung over your cold
meandering; can peace so easily close
the screaming lips of gangrenous jealousy,
mistrust? Broken small child weariness says it
should; ubi caritas et amor says it must.

As well as sketching from earliest childhood  –  even on the house walls until I was told this was not the place for a toddler’s scribblings!  –  I have written poetry for as long as I can remember. Topics vary from nature to people, issues of ecology and the spirit and, more recently, a growing section on the Troubles and the violence that continues to threaten peoples everywhere.

The above poem was followed a few years later by Belfast: Lagan Revisited. This was prompted in part by an incident that broke tragically in on the Peace Process which had been holding, despite ongoing tensions, since it had been initiated by Tony Blair in 1998. I say in part because, since I started making artwork on my experiences and memories, I find that I work in a cyclical process, especially when carrying out my hand stitching; stitch leads to words which then lead back into further stitch. On one occasion, as I stitched with the rhythms of the black silk threads, a particular time started to relive itself in my mind and, together with my sadness at the death caused when a shooting broke the peace, words flowed into the poem Belfast: Lagan Revisited.

I have recorded myself reading several of my poems, including Belfast: Lagan Revisited and have put these onto Soundcloud, so if you would like to listen to it, just click on the title.

I will shortly be adding a separate section on my poetry.

Beyond a further expression of how smoke so often engulfed people and buildings in the city during the Troubles, in its repetition of figures and other elements such as the armoured vehicles and army ambulances that, together with their civilian counterparts, would race through the city  streets, this image also speaks of how experiences would repeat themselves over and over again in the mind. Even after moving away on marriage and the violence of the Troubles started to lessen, I would wake up during the night and would have to go through a list of my experiences like a litany before I could sleep again; it was almost as if my body couldn’t quite believe it was still in this world. This could be in part because there was one occasion in particular when, caught in the direction of a blast close by, I completely believed myself to be dead and was very surprised to find that I still existed in this mortal life. 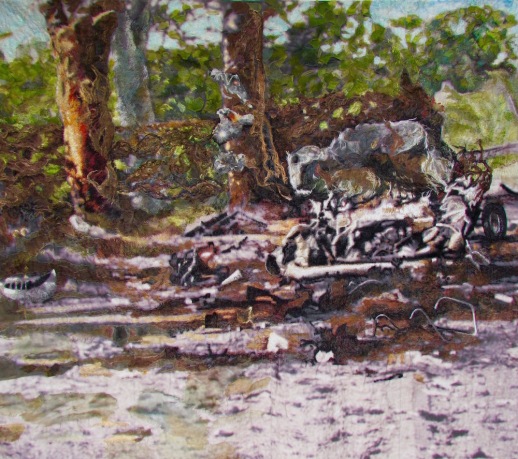 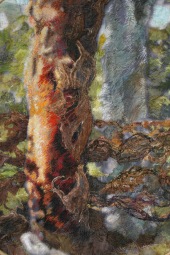 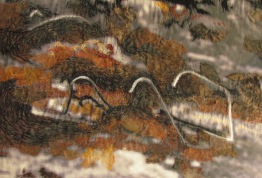 This is the first of a series of large works which focus on particular aspects of or specific incidents which occurred during the Troubles, in this instance the event which became known as the Miami Showband Massacre. The incident occurred in July 1975 when the cabaret band, members of which were Catholic and Protestant, were returning home to Dublin after a gig. They were travelling towards Newry, Co. Down, when their van was stopped at what they thought was a military checkpoint. However, though those who stopped the band were in British army uniform, this patrol was a pretence and two people were themselves killed when the bomb they were trying to place in the back of the band’s van went off prematurely. Three members of the band were subsequently shot dead by other members of the bogus patrol. The two remaining band members were also shot but survived their injuries and were later able to tell what had happened.

I did not witness this incident myself but I was present when a vehicle was blown up by the IRA. This occurred in Belfast when I was working for a firm that produced textile machinery. The firm does not exist any more but in the 1970s and 1980s it was an important employer with offices and factory on the Springfield Road, the workforce being mainly Protestant though the business was situated in Catholic West Belfast.

My position was Italian translator and interpreter and I worked in the Translation Department, mostly for the firm’s representative for Italy. About a dozen of us worked in this department, all female with male Head of Of Translation and we were specialists in the languages of various countries in which the firm carried out its business. Our office was not far from the front of the building and one day, I made my way down the long corridor to the washrooms at the rear of the building to rinse out my coffee cup. I was by one of the sinks when suddenly there was an ear-splitting explosion. The sound was so great, my ears hurt, then there was silence.

I thought the main factory building, which was across a narrow road on the other side of the outside wall of the room I was in, had been blown up. However, at lunchtime, I saw what it was that had made such a great sound. A police land rover, parked on the other side of the washroom wall, had been blown up. The vehicle was a mangled mass of blackened metal, the top part a mess of jagged bits sticking up, the tyres melted into the tarmac. Inside this vehicle had been four police officers, two male and two female. I heard that they were taken to hospital but whether they lived or died, I don’t know, nor could I think how anyone could have survived in that vehicle that had been torn so violently apart. The silence afterwards was ominous and sorrowful.