The collaged piece Continuum came about after I had made Requiem: Les Fleurs du Mal 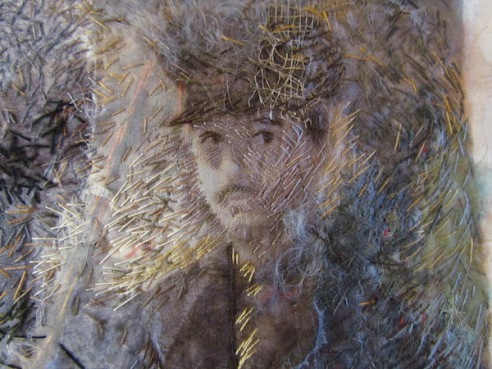 There is information about this work in my Conflict section but, briefly, this was the first stitched artwork I made in connection with the subject of war and conflict and it came about because I wanted to do something to commemorate the coming centenary of the death of my grandmother’s brother, Thomas Keith, in the Second Battle of Ypres, March 1918. He was just 24 years of age and was one of the first Allied soldiers to be gassed. Horrible to contemplate, Tommy’s death and all the others during that terrible war did not turn out to be, as had been so hoped at the time, part of a ‘war to end all wars’ because only a couple of decades later, the world was at war again; and it didn’t end there.

The images in the piece are stitched and appliquéd to unbleached linen and edged with blanket stitch. The work has been exhibited both framed in white wood and as an unframed wall hanging but, at its inclusion in the exhibition Stitched Voices with Conflict Textiles in Aberystwyth Arts Centre in 2017, the piece was stitched to a hessian backing by Deborah J Stockdale of Conflict Textiles to be in line with the arpillera artworks. I first met Roberta Bacic of Conflict Textiles in Aberystwyth when she invited me to exhibit Continuum in this exhibition and I continue to work with her on exhibitions and workshops.

The following is an excerpt from a blog about the exhibition Stitched Voices by Michael Tomlinson for New Welsh Review (Issue 113):-

‘Continuum’ by Eileen Harrisson, from 2014, is a complex and beautifully conceived stitched collage of images from the Troubles in Ireland. There are small shards of glass sewn into the design, a disturbing reminder of the victims killed during the violent history this work remembers. It is a gorgeous work, one that is almost too tasteful for the subject matter. 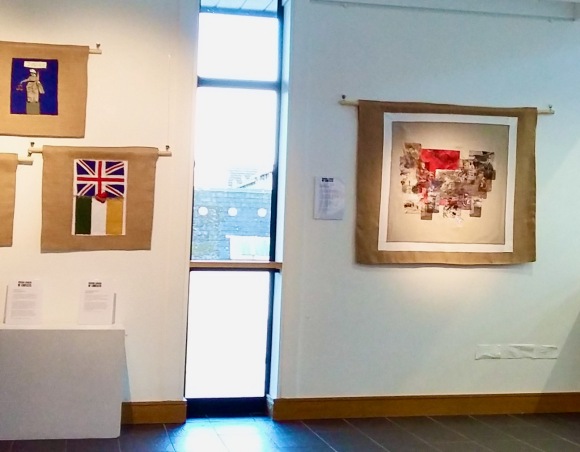 This is Continuum in the exhibition Stitched Legacies of Conflicts in the Roe Valley Arts and Cultural Centre, Limavady, County Londonderry, again with Conflict Textiles. The image shows how it is in keeping with the Northern Irish arpilleras and how they are displayed on the gallery wall. 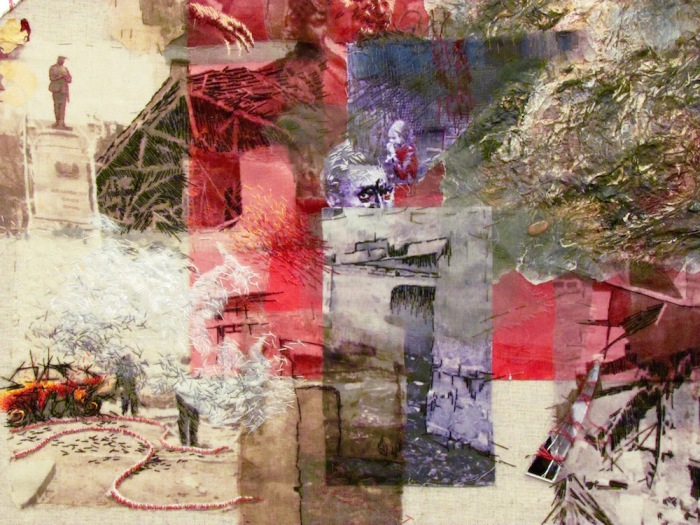 Detail from Continuum, section showing destruction from the Troubles and including the Enniskillen War Memorial where one of the tragic bombings took place. Also shown are areas of fabric red with fire, flame and blood and a section rough and textured like skin. A mirror shard lies partly concealed by organza and stitching of ruined buildings.

We now have wars such as that in Syria and the threat of terrorism everywhere that can devastate so many human lives and drive societies apart. I made Continuum in response to the news of war in television reports, to the terrorism that has caused and continues to cause so much suffering and as a documentation of my memories of living and working in Belfast at the height of Northern Ireland’s Troubles. At this time, bombs exploded in the city and across the country, often with no warning beforehand, on an almost daily basis and it was such a relief to have a day when no-one died.

The artwork places images of the Troubles side by side with those related to the two World Wars and included are a member of my husband’s family who served as a soldier in the First World War, my father and his RAF squadron during the Second World War and destroyed buildings and people caught up in the bombings of the Troubles. Included in this detail is one of the mirror shards that float across the work, held to the fabric surface with red thread. These shards bring our reflection into the drama of the work and we are invited both to bring our own experiences to engage with the piece and to reflect on what it is within the human psyche that leads some to follow paths of often indiscriminate destruction, causing so much pain, tearing lives and families apart. Seen here, too, is a section of the work built up in withered flower petals and paint on torn fabric, process that has created a surface reminiscent of both burnt ground and charred flesh. Through presenting these images of conflicts that have affected generations of families from many countries, viewers are invited to bring their own memories within the flow of the artwork. 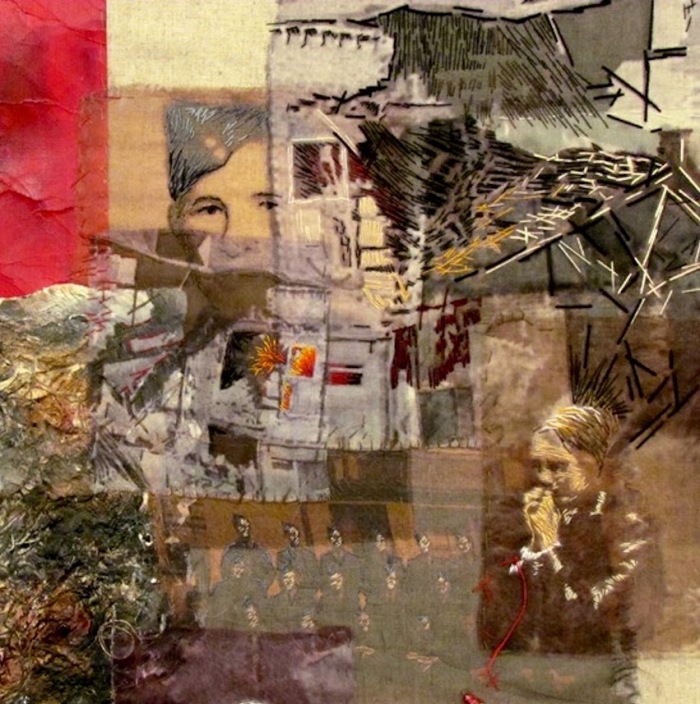 This detail from Continuum shows my father in his RAF uniform, the squadron on its formation in Morecombe, a bombed-out building from the Troubles and the figure of a child, crying in fear after an explosion.

This image of the crying child is repeated across the piece because I find the hurt caused to children by the conflicts of adults so reprehensible. This child is from the N. Ireland of the late 20th century and I also made Her Pillow, the Earth in memory of and in response to the deaths of children in Syria in this present century, in this case in Aleppo in particular. More about this piece is on my Conflict page and both pieces have been exhibited under the aegis of Conflict Textiles. My piece Continuum has been shown at six exhibitions to date, two solo exhibitions, A Sense of Longing: Hiraeth, MOMA, Machynlleth, Powys and Conflict, Mid Wales Arts Centre, Powys and three group exhibitions, Lines of Communication, Prism Exhibiting Group, Hoxton Arches, London, Stitched Legacies of Conflict, Roe Valley Arts and Cultural Centre, Limavady, Co. Londonderry and Stitched Voices, Aberystwyth Arts Centre, Ceredigion.

In addition to these exhibitions, I was invited to show work in the Willow Gallery, Oswestry in the exhibition War and Conflict, Poetry and Peace in autumn 2018 as part of the Wilfred Owen Festival 2018. The Festival incorporated a range of exhibitions, talks, concerts and more held in and around Oswestry in commemoration and celebration for the life and work of WW1 poet Wilfred Owen on the centenary of his death on 4th November 1918. Continuum was one of the main pieces within my work which took the form of an installation comprising wall pieces, poetry, film and nurse’s cape with stitched embroidery on stand. The installation was entitled Conflict and Redemption with works expressing the tragedy of conflict but also, as with Continuum, aspects of healing that lead to peace. Within the exhibition, I  gave two live performances of my poetry interspersed with stories of my experiences during the Troubles and aspects of my life, the first reading/performance forming part of the Exhibition Opening and the second taking place during the exhibition’s run. 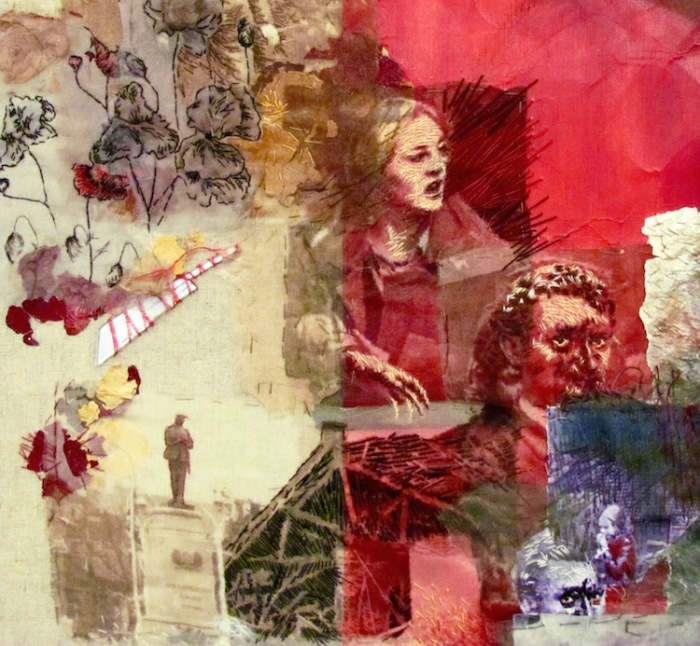 As well as imaging the destruction of buildings and the fear and waste of the violence, the piece also points to the caring side of humanity that offers hope, in the figure of a young woman who goes to the aid of a bomb victim. She holds his wrist tenderly as she looks for help; he stares at us, shocked, covered in ash. The ravages of violence have not taken away the impetus for compassion that so many share. 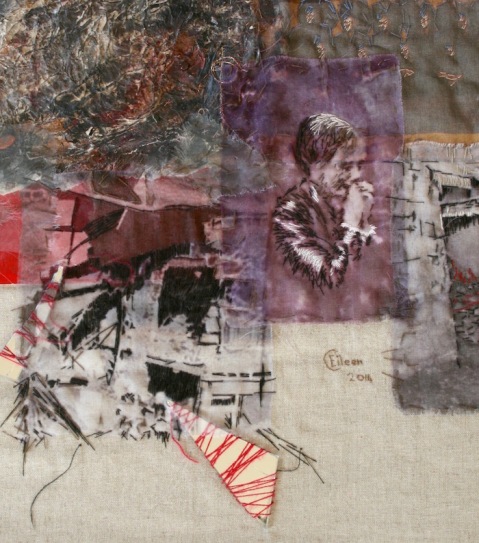 This detail shows another of the mirror shards that are held to the fabric surface with red thread. Their inclusion allows us our reflection to be brought into the drama of the work and we are invited both to bring our own experiences to engage with the piece and to reflect on what it is within the human psyche that leads some to follow paths of often indiscriminate destruction, causing so much pain, tearing lives and families apart. The weeping child calls out for our help and protection.

The film Continuum was made to go with this wall piece and poem of the same name and information about the music, the poetry and making of the film are on my Film page in this website.